Since the fall of 2014, the International Slackline Association has been gathering information about slackline related incidents and injuries including falls from a slackline, rigging errors, gear malfunction, and near miss incidents. This information has been gathered through the Slackline Accident and Incident Report form on our website (EN, DE, PR, FR language SAIR report forms) and as informal reports through conversation and social media.

This information has been collected and analyzed in the International Slackline Association Accident and Incident Report 2015 which can be read in full in .pdf format at this link or by clicking on any of the images below.

The SAIR form is intended to gather information about gear failures, rigging mistakes, and other incidents regardless of whether an injury occurred. It is our hope that with this publication, more gear and rigging incidents which have occurred will be reported and that this information will help to minimize the occurrence of future incidents.

Summary of the International Slackline Association Accident and Injury Report 2015

The data below summarizes the official SAIR reports submitted online. The full document also includes some information about all known slackline incidents which have been informally reported. This information is provided as a reference for slackliners to learn from to minimize future incidents. 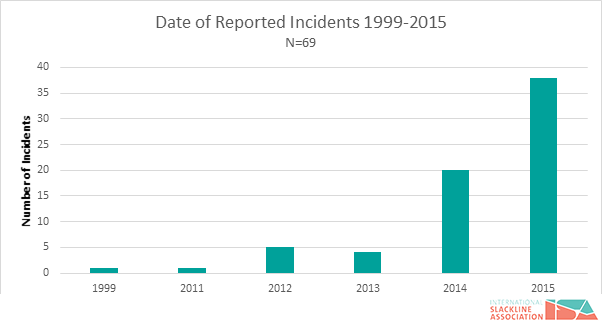 This analysis focuses on the 69 incidents reported before February 4th, 2016. 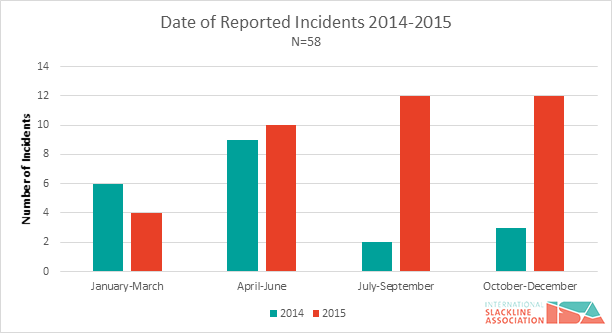 Most of incidents discussed in the following pages occurred in 2014 and 2015 with no obvious seasonal bias.

Figure 3 – Slackline Incidents by Nationality of the Reporter 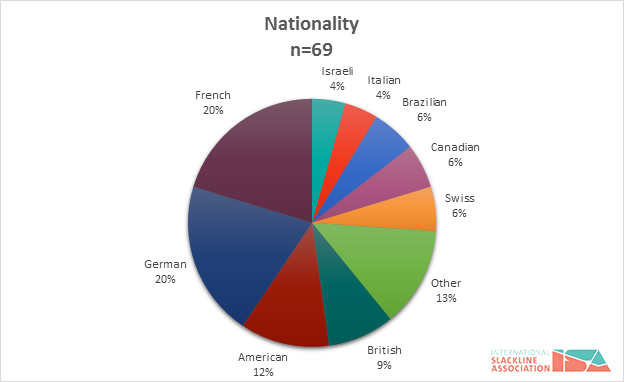 In terms of location and nationality, 20% of reports were submitted by French slackliners and another 20% submitted by Germans. 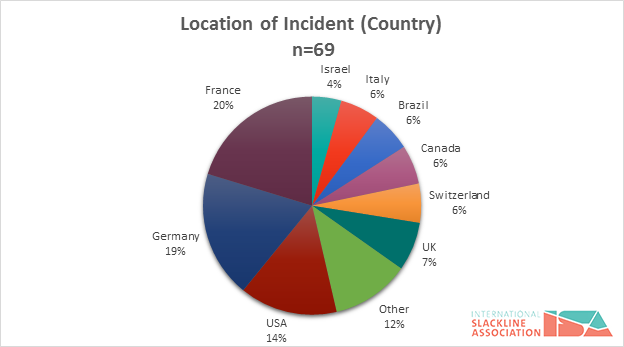 The trends in terms of location closely match the reporter nationality. 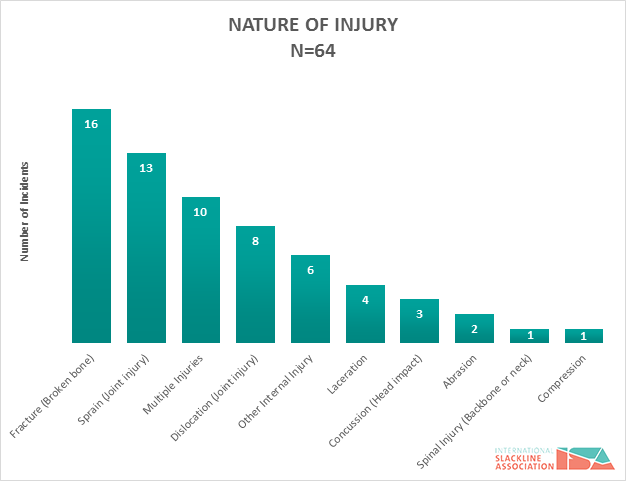 The largest category of reported injuries reported are sustained from “falling off the slackline”, whether it be a longline, trickline, or other. Very few incidents were reported through the SAIR in which someone was injured due to gear failure. In fact, upon closer inspection the one incident reported as “injury due to failure and falling off a slackline”, the purple mark in Figure 7, is described in the narrative provided as the person becoming tangled in a leash during a fall on a midline with no description of gear failure. The narratives of many of these reports describe the participant attempting a new trick, learning a new mount, or other progression. 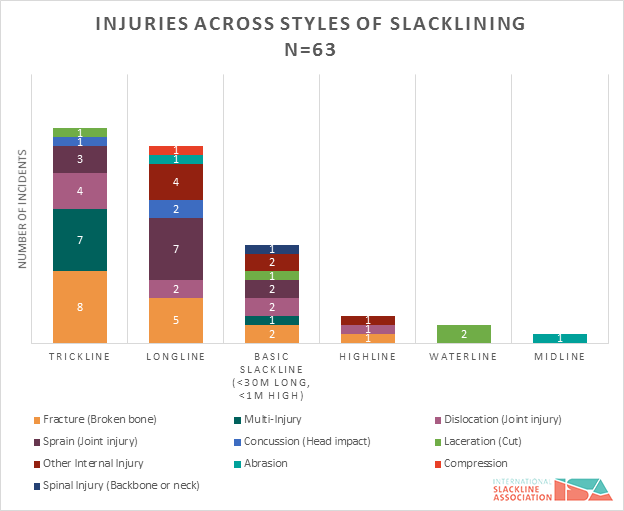 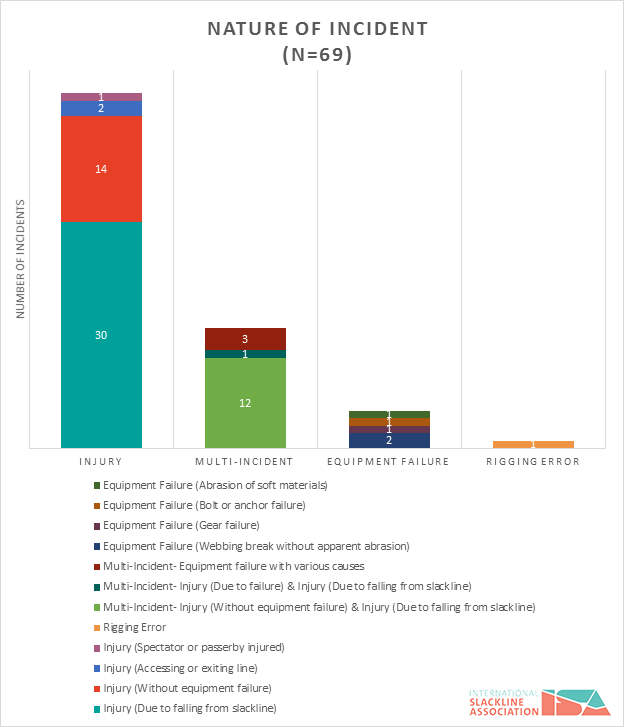 That the predominant cause of injury in slacklining is reported as being due to falling from the slackline indicates that gear related injuries are uncommon and that incidents rarely relate to equipment or rigging quality. Rigging errors and gear failures are known to have happened, though few have been reported to the SAIR as of February 2015 when this data was compiled.

Current estimates place the active slackline population at between 10,000-30,000 people (‘active’ being people who slackline regularly and are involved in the larger slackline community). When including people who occasionally slackline, slackline in climbing gyms without becoming more involved in the sport, own slacklines without using them often, or have slacklined in the past, this number could be as high as 300,000 – 500,000 people. When considering the low number of incidents found in context with other sports, slacklining appears to be relatively safe. The primary mode of injury in slacklining is falling whereas other sports, particularly team contact sports, have multiple modes of injury to be considered.

This document describes a total of 69 SAIR submissions and 35 informal reports of rigging errors, gear failure, and leash errors for a total of about 100 known incidents from 2009-2015. Many of these incidents can be at least partially attributed to a lack of safe rigging knowledge as the sport developed.

This is not a complete data set as it relies on participants self-reporting. However, given the degree of connectivity within the slackline community, it is uncommon for major incidents to remain unknown and unreported.

The majority of reports in this data set focused on injuries. The SAIR form is intended to gather information about gear failures, rigging mistakes, and other incidents regardless of whether an injury occurred. It is our hope that with this publication, more gear and rigging incidents will be reported in the future.

As the community grows, augmented by social media, the need for data analysis and educational resources increases in order to maintain the relative safety within the various disciplines of slacklining. It is for this reason publications such as the Webbing Slippage Warning, Buddy Check Advisory, Longline Recommendations documents, and more are prepared and distributed by the International Slackline Association. These documents and more can be found on the Publications page of the ISA website. 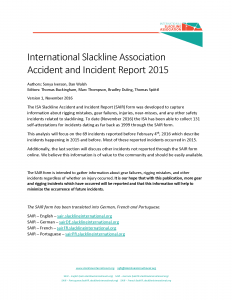 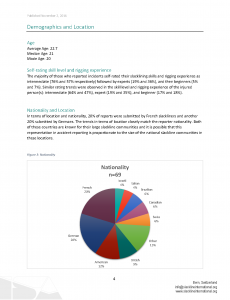 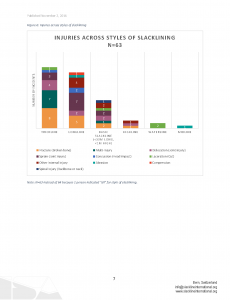