From the July 30th to August 14th, Arthur Lefebvre gathered a group of friends to make an attempt at the highline world record, set previously at 2240 meters.

The world record was broken not only by one person, but by 8 people, 2 women and 6 men. Check out some of the details behind the sucess of this project here.

A report by Augustin Moinat

The man behind the project, Arthur, wanted a project made with friends, by friends. He managed to get all relevant authorisations but didn’t want the burden and pressure of sponsors for this project. The only sponsor was the organic supermarket which provided us with stocks. All the gear, in particular the webbing, belongs to the different people who joined the project.

There were about 35 people in total coming to the project, some staying only a couple days, some staying the whole time. We had mostly French, but also German, Canadian, Romanian, Belgian, Italian, Swiss and American.

In Arthur’s own words,

“Since I started to do long highlines I always felt the need to push my own limits further. In 2020 I organized a project where we rigged a 1370m highline in this area of France. At this point I started to believe that I would be capable of beating the overall lenght world record. I grew up in the area and always knew this place, and started seeing it with highliner eyes. In september 2021 I decided to go for it, and by april 2022 I had gathered all the authorizations and started building a team of strong, dedicated highliners. Everything was in the right tracks and the project happened !” 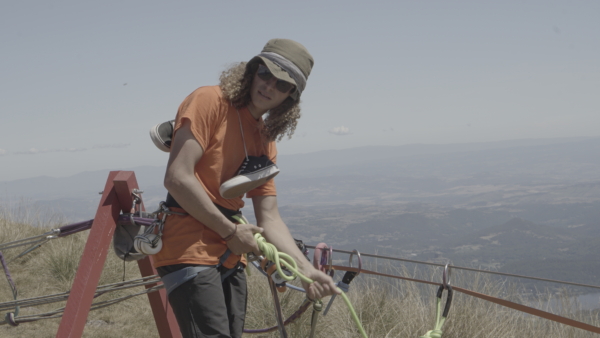 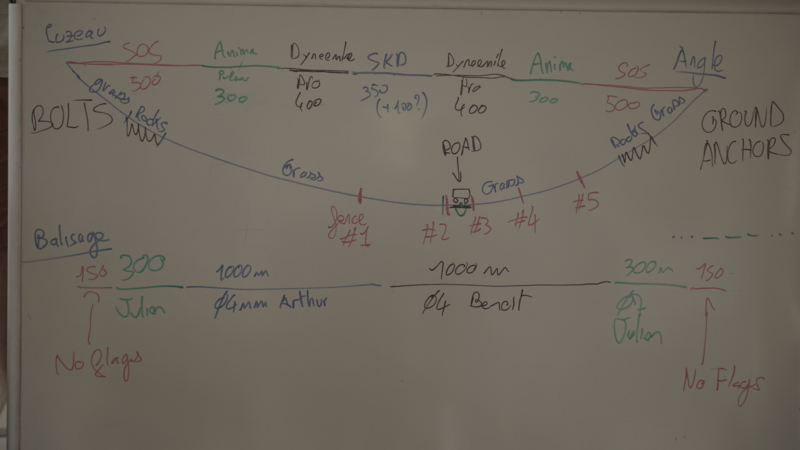 The whole set-up was made of narrow webbing to reduce wind drag. We put the thinner webbing near the middle, and the widdest and most grippy on the slopes near the anchor and in the weblocks and linegrips. Alternating between different webbings has other advantages: it’s easy to tell, from the line or even from the ground, how far the highliner is along the line. They also have each their particular way of hurting your feet, which means you can endure more.

The weakest point of the set-up were the sewn loops of the SOS, which hold 24 kN, and the Pulsar back-up, which holds 26 kN. Indeed, in case of a back-up fall, a 3 meter extension doesn’t reduce the tension of a 2700 meter set-up by much.

There have been observations of burn marks on webbing, under the tapes used to keep the back-up in place. This happens especially after rain, and some lines have been fully destroyed.

Our theory is that while wet webbing conducts electricity, the dry part under the tapes acts as a resistor, and heats up. This can happen even when there is no lightning. We chose to not use any tapes, so that all the webbing would get equally wet

None of those “tapes” broke during the project.

We used pretty classic highline anchors, but made them stronger than you normally would as we were expecting up to 10 kN on the line. We used 6 bolts in some rock on one side, and 6 ground stakes on the other.

Together with some small A-frames, these were very comfortable anchors to manage the tension from, to tie in, and get off the line.

We got authorisation from the civil aviation and the french military and published a NOTAM, but according to french regulations we still needed air signalisation.

The rules specify shape and size of flags, plus distance between them for day time signalisation. We followed those regulations, and the authhorities came to check it. They found that their rules were not strong enough, and asked us if we could improve by adding a few huge “flags” (king size bed sheets) in the line. After we did, they found that to be much better, so we can expect some changes in the regulations.

We used lamps made by Victor Oudit, with solar panels and batteries, which turn on thanks to a light sensor. Those worked really well, but we didn’t have quite enough to follow the regulation. They take some time to produce, and we are still using prototypes. 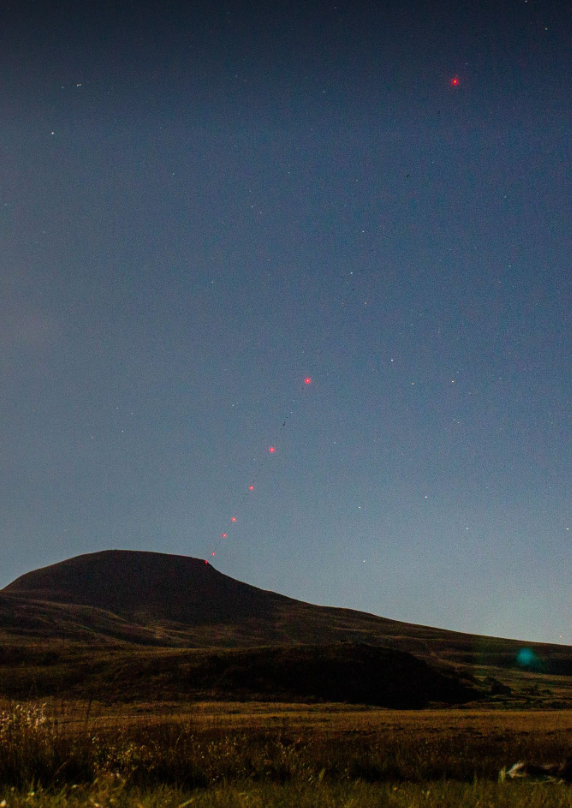 On Saturday 30 th, we gathered near the spot and most of the crew got their first peak at the gap. It looked huge, but quite friendly: grassy slopes with cattle, sheep. We walked together to both anchors and put the goundstakes in the ground and the bolts in the rock. We discussed as a group how to make the anchors and made sure everyone was familiar with them.

After a while, the spot starts to feel familiar, and the idea of a line here is just necessary. But there were still two days of rigging to be done!

On the second day, we rigged the flag line. It was a good trial of the rigging method, which is just to lay the line on the ground, from the road to both anchors. When the line reaches the anchor, the road is closed for a minute, and we connect and lift the line by tensioning. This worked perfectly and gave us confidence for the next day.

In the meantime, part of the team was busy preparing the webbing. They made sure the same process would go smoothly for the webbing on the next day.

On Monday, the third day of the project, we rigged the line! We used the same process as for the flag and it went smoothly. Only 5 hours after the line was up and Arthur took the first run.

The line was too steep and super hard to walk in the section where Arthur started to walk. After 200 meters of  hard fight, he turned back. At the far anchor, the enthusiasm dropped. Benoit was still motivated and took the next run. His walk started strong, but when he got to the same area where Arthur had fought, he fell. But that was after walking 2.5 km without too much trouble, and we knew it was just a matter of conditions and having the right tension!

The next morning, after a bit of retensioning, I went on the line and when I got to the other side I was the new world record holder!

It took me most of the day to realise, and as others were going on the line and taking leashfalls, I was feeling more and more uncomfortable. Being the only one to send it felt like I stole the record from all the team: everyone put so much energy in the rigging and organisation, we should share the record. I felt I just got lucky with the wind conditions.

The next morning, Tania also sent the line and that was an incredible moment, better than when I sent! 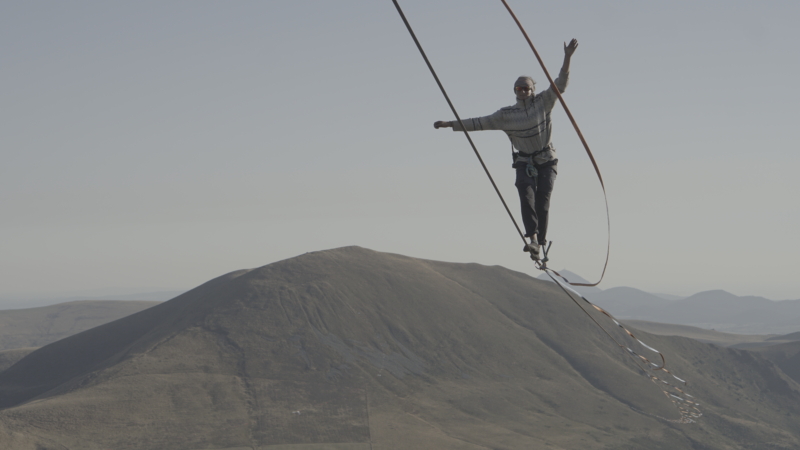 On Thursday morning, Artuhr also sent the line, also taking advantage of the morning wind. The project went from successful to super successful!

Unfortunately, there was a storm coming so we had to derig.

The derig went smoothly and we were glad for the storm did happen that evening. But then came the time of waiting for rerig, and it was a hard time for those that didn’t have time to go on the line yet or were not satisfied. We had plenty of time to prepare the webbing again. The wind lasted for 4 days, and it was still strong after we re-rigged. 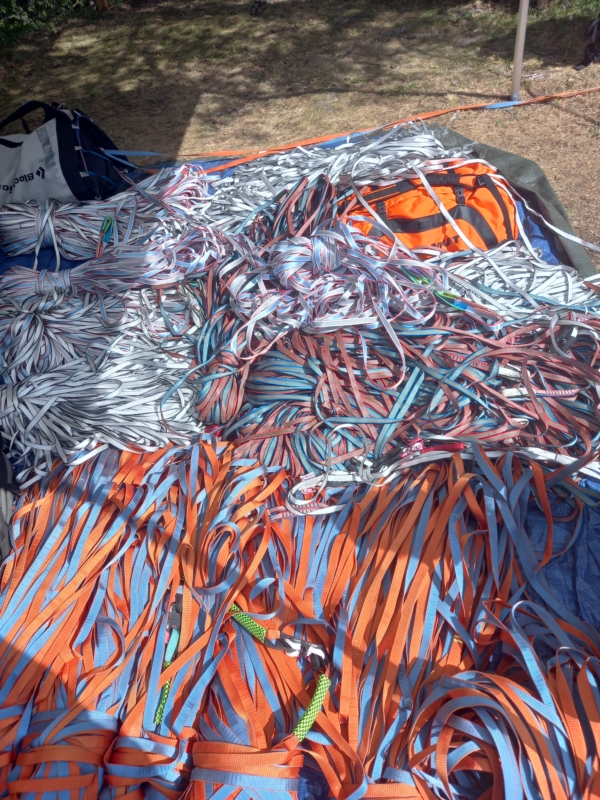 Everyone was even more stocked for the second rig than for the first one. It was a huge relief when we finally took the decision to rig the next morning.

The second rig went even faster than the first one, and less than 4 hours after leaving the parking, the first crossing started! As a bonus, this time we had managed to rig the whole line without a single twist!

The wind was still making the line hard that afternoon. During a crossing by Nathan, we even had to use the embeded pulley system to release some tension. The next morning however the conditions were perfect, and a motivated group who had spent the night at the anchor took the opportunity: Mia, Benoît, and Mattis joined the world record team. 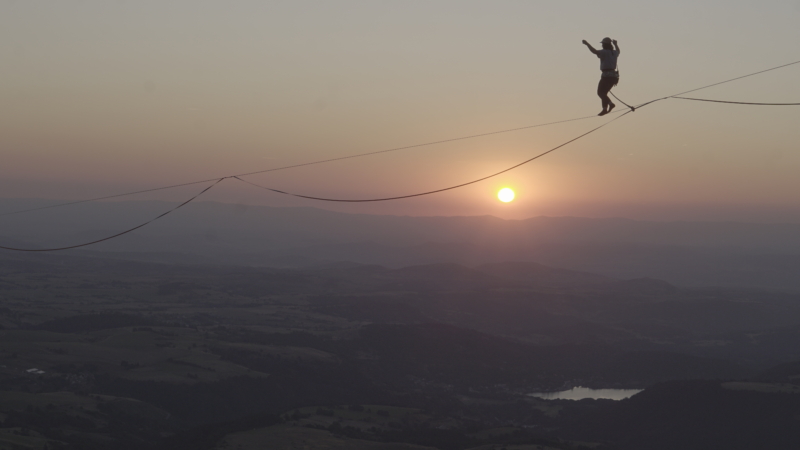 In the Thuursday afternoon, the wind got stronger and we had to detension the line again as somebody was walking it. The wind died in the evening and the conditions were perfect. Just after sunset I got on the line for a crossing, which quickly turned into a night session, but I was flying and there were shooting stars falling around me.

I think this inspired more people. During the day on the Friday, the wind picked up again. With no one on the line, the tension kept rising, and we released more and more pulleys. But in the evening the wind slowed down once more, and Zeph managed to send at night, Nathan got extremely close, and late in the night Julien also sent. 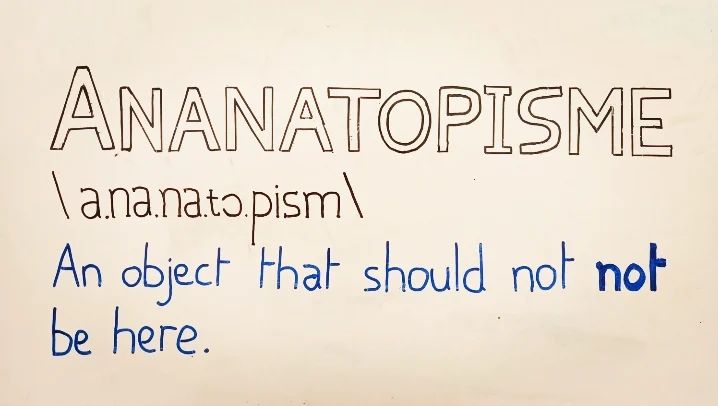 At this point the project was almost perfect, which means that everybody had gotten what they wanted from it. We only had to choose a name, and as everything in this project, it came from a group effort: Ananatopisme is a made up word that refers to an object that should not not be there. To me, it is also the feeling you have when you look at a spot where you just derigged a line, and it looks empty, something is missing. 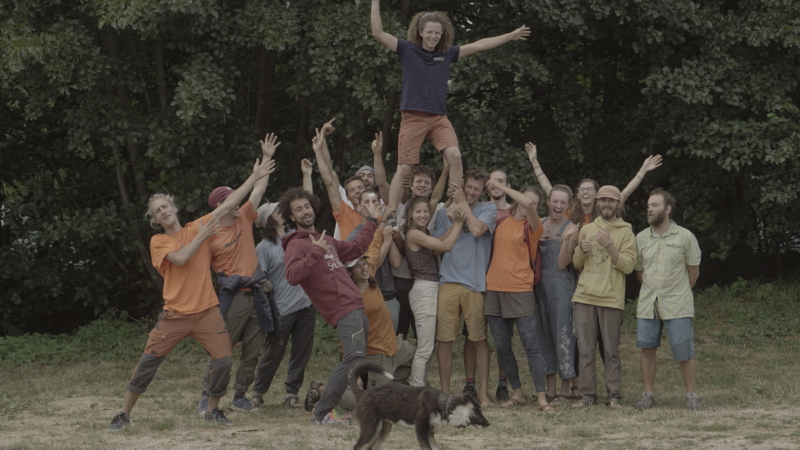 In this project, we reduced the amount of luck needed thanks to carefully planned preparation. There is no amount of preparation that can guarantee that such a project is sucessfull, but there is a lot you can do.

We derigged on the Saturday afternoon, and that night there was a big storm. Did we get lucky, or did we just have a very good meteorologist in the team, Nathan?

If you want to know more about the technical aspects of this project, you can read this technical document.