We previously posted about highlining, bolting, and bolting ethics in Norway, specifically in the Kjerag region. See that post here: Bolting and Highlining in Norway. On this page, we are expanding on the topic and providing updates as the situation changes.

Additionally, information about these lines and access in the area has been added to the SlackMap (https://slackmap.com/x/s02a8wqvBT8vX).

The most important point, bolting in Norway is illegal without permission of the land owner or land manager. For many years, highlines have been established in the fjords near Stavanger without permission of the land manager. This recently came to attention when highliners were approached by local climbing and hiking officials while rigging a new line.

The local conservation organizations, climbing organizations, and hiking organization have recently held a meeting in which on of the topics was the quality and number of bolts present in the Kjerag area. Some bolts have been placed by climbers, some by search and rescue operations, and some are placed as highline bolts. The decision was made at this meeting to clean up bolts in the area by removing or replacing bolts which do not meet the highest standards of quality (for reasons of safety and longevity) or which are of no further use.

As part of that conversation, representatives from the International Slackline Association have been communicating with Norwegian organizations. The current status with respect to Kjerag is that bolts currently in place may be used as long as lines are not left unattended and highliners follow good stewardship ethics (Leave No Trace, clean camps, no rock throwing to check height, etc.)

Some of the established lines may be rebolted and some bolts may be removed in the near future. For the time being, no new bolts should be placed without express permission from the conservation organizations and the land manager.

The beta for some of Kjerag lines is available at the links below:

Baseline – L : 23m – This is the classic Norweigian line from the Flight of the Frenchies / I Believe I Can Fly film. A recent report to us suggests these bolts may need to be replaced soon as they appeared a bit rusty.Ragnarök – L : 20m – We don’t recommend rigging this line. It is shorter, less aesthetic, and more public. Also, it is one of the lines the local organizations are less pleased with, as the bolts were placed on the top of the cliff, visible and creating potential tripping hazards. These bolts will likely be removed.

In the summer of 2016, a Czech group established a new long highline across the gap of the famous Kjeragbolten tourist site. This line brought bolting access issues to light and may have interfered with an established trad climbing route. The team that set this line were unaware that bolting was not legal without permission, as previous highlines had been bolted without permission and it had not been noticed by the local conservation and tourism organizations. At last report, these bolts still remain, but we ask the community to refrain from rigging this line as it may exacerbate access issues in the area. This site draws more than 3,000 tourists a day in peak season, and the local tourism and conservation organizations have requested this line be removed. See the picture below and this FB post for more information. 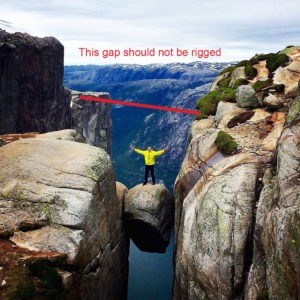