Across the Sky – Castleton Highline Record

On November 15th, Théo Sanson (FR) sent a 493m highline in the Utah desert, a project masterminded by Andy Lewis. Check out the video below and part of the story written by Andy which will be published in full this spring by Slackline U.S.

“Hands down this is the scariest, most fear inspiring, inner child murdering, monster of a highline — I have ever seen. Just walking 1/3 of this highline would break my Personal Record by nearly 40 meters!!~ I’m not sure if it’s the 2000′ of exposure, the 1600′ of line stretching into oblivion, or the fact that I consistently BASE jump from lower than the amount of SAG this line has… But flabbergasted is all I feel at the anchors. Full on– 110% — flabergastification.” – Andy Lewis, Facebook post 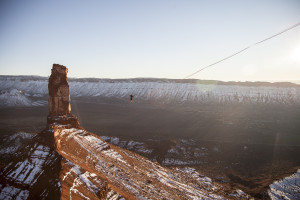 Beginning in 2010, in the last 5 years I have been a part of rigging 40+ tower highlines in and around Moab, and this gap was always on my radar. It was just a matter of time and organization. When the World Record this summer went to 469m, and then hit 477m with Samuel Volery, I decided to go on Google Earth and measure the Castleton line because I thought— at first– that the new record might have already exceed the distance of the gap, and I was curious. I knew it would be close.

I uploaded Castle Valley and measured the distance… 510 meters. I imagined the highline, 2000ft high, on the summit of 400′ towers, 1600+ft long, and at that moment, I posted online that we should rig this gap and try to walk it. I put an image of my measurement from Google Earth and said I had all the gear! Many people responded or displayed interest, but only Theo actually came to Moab; and he came with a crew with stoke pouring out of their ears. Now, it was 6:30am and I had to get out of bed and push myself out to the highline. This was a project just for fun, by slackers who just love slacking; and sometimes the fun comes from pushing yourself outside your comfort zone. I tossed my covers to the side, and embraced the November chill on my skin as I headed to the kitchen to make coffee. 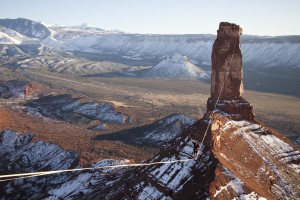 The Castleton Line spanned the distance between two of the most epic and iconic formations in the desert. Castleton itself is a vertical sandstone tower, a sentinel over the Colorado River, and The Rectory, our second anchor, a jagged collection of spires across the saddle connecting them. At 1600 or more feet across, with sag of nearly 150′ this line not only had the potential to break world records, it defined a level of highlining so massive it infringed on federal airspace. Hence, me being up at 6:30am filing a Notice to Airmen (NOTAM) to make sure any pilots in the area knew of the line.

Read the full story soon, in Andy’s own words, published by our partner, Slackline U.S. 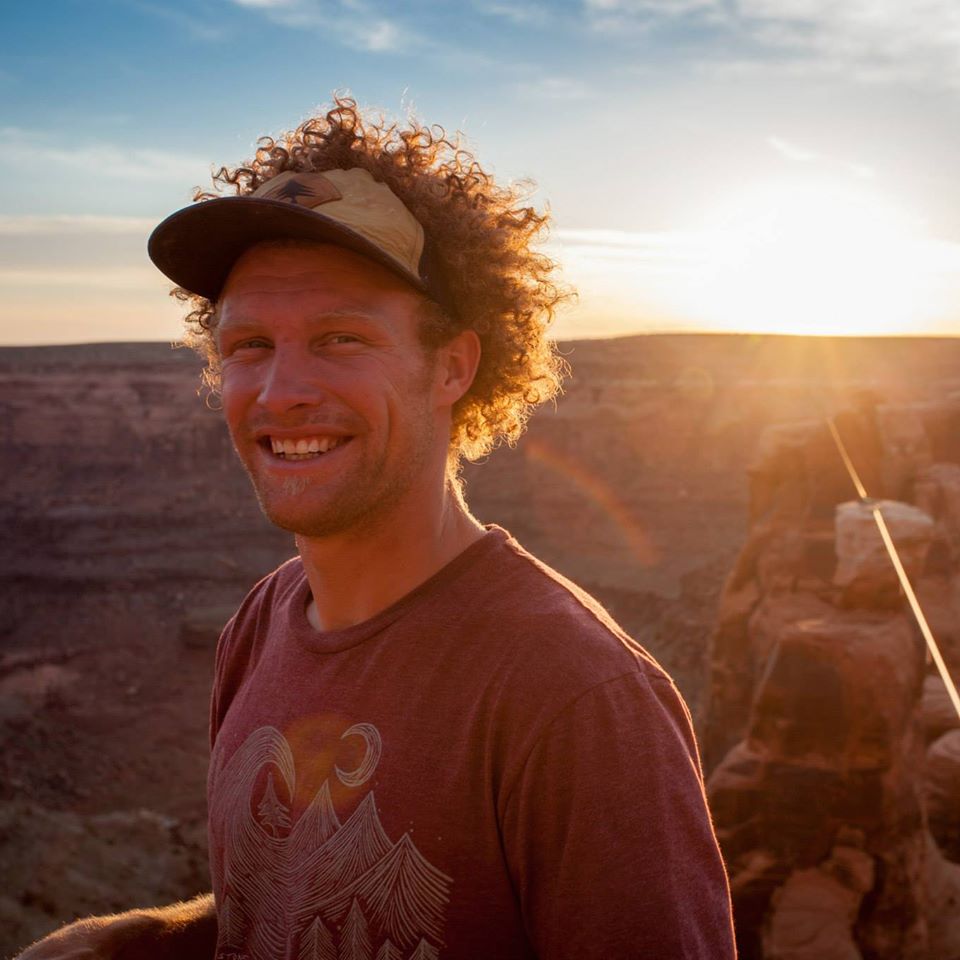 Andy Lewis is a rather infamous slackliner and basejumper known for his sketchy antics and passion for life at full throttle.