The highline extreme – World Record gathering on the Moléson 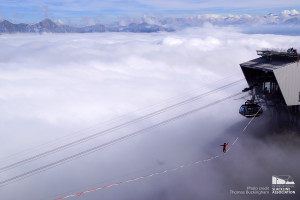 During the last weekend of September highliners from all over Europe gathered on the Moléson in Switzerland to deliver a great show and try some of the longest highlines ever rigged. The event was organised by Samuel Volery from slacktivity.ch in collaboration with Claude Gendre from une-bonne-idee.ch. After last year’s success of the event, more highliners turned up and enjoyed a free stay sponsored by the restaurant and the cable car company. 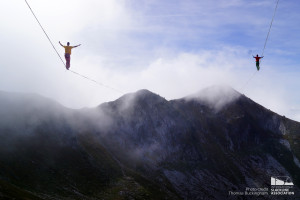 There were four lines rigged from the cable car station ranging from 45 to 150m as well as the two world record lines at 296m and 477m. The good atmosphere and the beautiful weather above a sea of clouds gave everyone high spirits. Sarah Rixham (GB) broke the women’s world record on a wobbly 122m line during sunset. Furthermore the 296m line was sent in succession by Nathan Paulin (FR), Friedi Kühne (GER) and Alexander Schulz (GER) over the course of two days, but this new polyester world record should not stand for very long, as Samuel Volery (CH) was on his way to send the 477m when Alexander finished its shorter sibling. Thus, on the 26th of September, Samuel Volery broke the overall highline world record on a polyester line (PES mainline and backup, 2x 48g/m, 2 cm wide webbing,) full PES over a beautiful sea of clouds lit by the sunset. 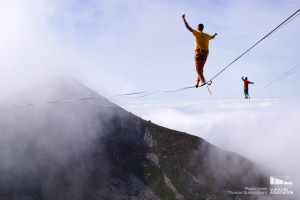 Everyone was glad to have been part of this event and Saturday evening ended in a big party in the summit restaurant, much to the amusement of the other guests. 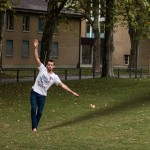 Marc Thompson has been slacklining for 4 years, is on the board of SlackAttack and studies English and Spanish language and literature.

The Swiss athlete Samuel Volery finally did it. Two months after a lightning stopped his try to break the highline world record, he manages to set the new record to 477m during the Highline Extreme Festival – with an incredible sunset scenery over the clouds.